The following picture is part of an ad that ran in McCall's Magazine in 1971. 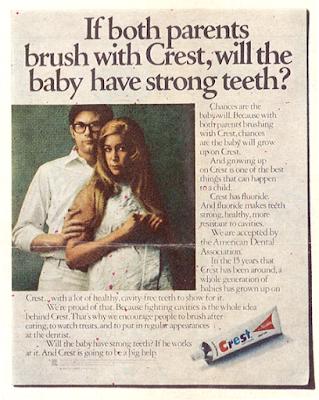 Weird models...right?  But beyond that, the ad raises some questions.  What do they mean by "strong"? (Does brushing make teeth strong or does it help keep strong teeth healthy?)  Are they suggesting that the parents brushing behavior can influence the traits of their child?

Alice: Yes...strong teeth is something a child will inherit from the parents.
Bobby: Yes...brushing your teeth makes the teeth stronger so parents who brush will pass strong teeth on to their child.
Camille: No...Only DNA is passed from parent to child and brushing your teeth doesn't affect your DNA.
Dominique: Yes...if the parents brush their teeth the child is more likely to brush giving the child stronger teeth.

Which student do you agree with the most?  Why?

Bobby's answer is the weakest.  It demonstrates a common misconception that traits acquired during one's lifetime can be passed to offspring.  This idea is attributed to the French naturalist, Lamark.  Alice's answer is true, characteristics like tooth shape and tooth enamel are inherited.  However, Alice's answer doesn't address the effect of brushing.  Camille and Dominique both have accurate answers.  As Camille says, tooth brushing doesn't effect DNA and therefore, can't be an inherited trait.  Dominique looks at it differently focusing on the ability of the behavior of the parents to influence the behavior of the child.  If the focus is on behavior then yes, it seems reasonable that parental brushing will promote good dental care in the child.

Here's the full ad.  I think it's safe to assume that many people were confused by this ad and assumed that it was promoting a Lamarkian viewpoint.  As the ad writers tell it, "In the ad we were trying to say that if the parents use Crest, chances are the child will use it too."  Then they add "But we didn't say it very well." 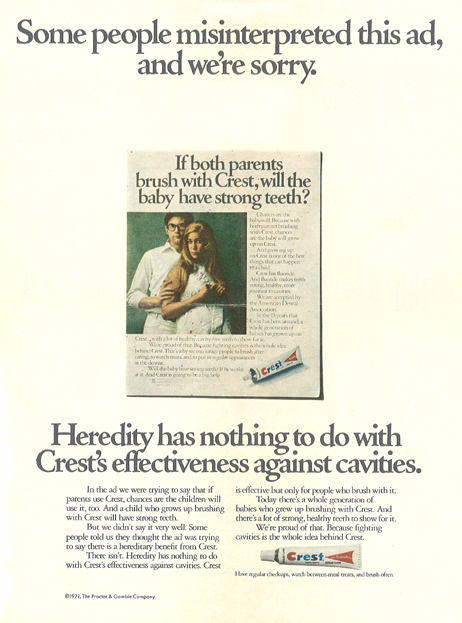 Thanks!  And keep brushing after every meal.

Posted by himelblog at 7:18 PM