Short Post this week...Just a cartoon and a plea for laboratory safety. 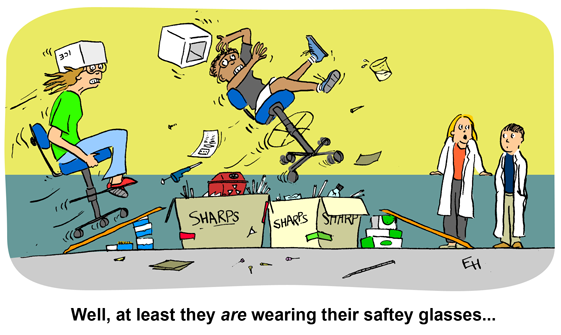 If you have a topic for a future cartoon, please write it in the comment box...then look for it in a future post. Thanks!
Posted by himelblog at 8:47 PM No comments:

Get on the Protein Train!

This isn't a very fancy drawing, but I've used it for many years to introduce monomer/polymer relationships in my introductory class.  Proteins (polypeptides), nucleic acids (DNA and RNA), and some polysaccharides (starch, cellulose and others) are all examples of polymers.

A train is made up of individual cars (monomers).  For our train there is an engine, a caboose, and cars that can carry either pillows, milk or lead.

Now imagine a train made with exactly 6 cars (a polymer).  There would have to be an engine at the front and a caboose in the back.  But we can put whatever we want in the middle four positions.

If you were the engineer of this train you would definitely want to know what those four cars were carrying.  For example, a train with three cars carrying pillows and one carrying milk will be very different to control than a train with three cars carrying milk and one carrying lead.  The maximum speed, stability, time to stop, etc. will be determined by those four cars.  The fundamental idea here is that the properties of the polymer are determined by the monomers that make it up.

This drawing can also be used to help students understand that, even with a small number of monomers, many distinct polymers can be made.  You need to know two things:

n = number of monomers to choose from
r = number of choices to make (i.e. how long the polymer is)

To find the number of possible combinations use:

For our train we only need to worry about those middle four positions.  We have three choices (pillows, milk, lead) so n=3.  There are four spots to fill so r=4. Therefore,
the number of possible trains = 34 = 81 different trains.  Each of those 81 trains will have slightly different properties because of the make-up and order of the cars.

We can extend this thinking to one biologically important class of polymers, proteins (or polypeptides).  Almost all proteins are made out of the same set of 20 amino acid monomers.  For proteins n=20. 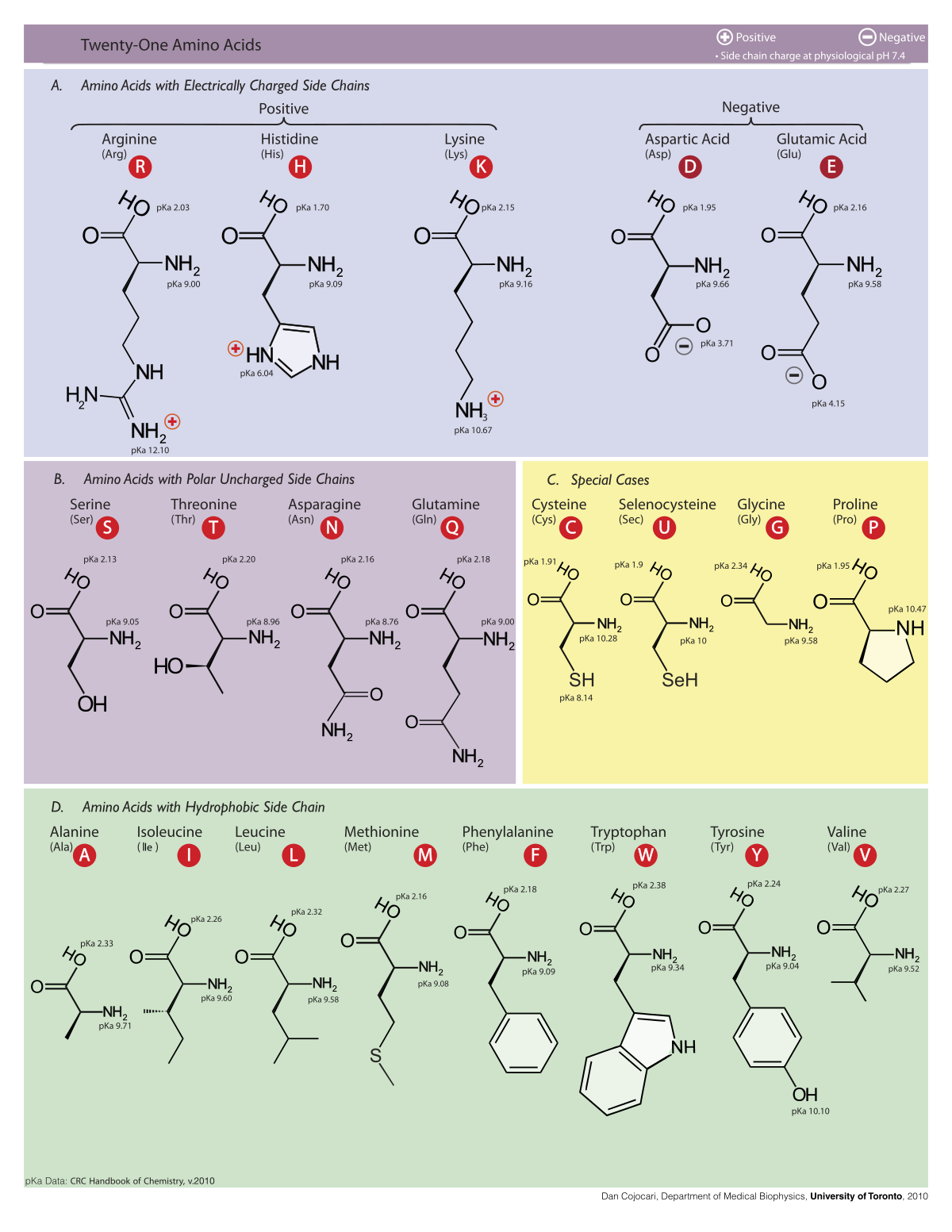 "Molecular structures of the 21 proteinogenic amino acids" by Dan Cojocari ✉·✍· - Own work This vector graphics image was created with Adobe Illustrator.. Licensed under CC BY-SA 3.0 via Wikimedia Commons.

Proteins have tremendous variation in length.  The human genome encodes around 30,000 proteins with an average length of 450 amino acids (the largest, the muscle protein titin, is about 33,000 amino acids long).  For the average human protein r=450.

This is the number of possible different proteins that are 450 amino acids long.  This is a big number...a very big number.  In fact, physicists tell us that this number is greater than the number of atoms in the universe!  So with just 20 amino acids (monomers) a huge number of distinct polymers could theoretically be made.

(I used the same formula in my recent post about PCR primers.)
Posted by himelblog at 10:14 PM No comments:

Too Many PCR Primers!

When I order primers for teaching and research I use the Integrated DNA Technology (IDT) company.  You enter the sequence online and each primer arrives in the mail in a separate tube.  IDT primers come in a 2ml cylindrical tube with a white sticker and a blue cap (hence the color scheme for this cartoon.) 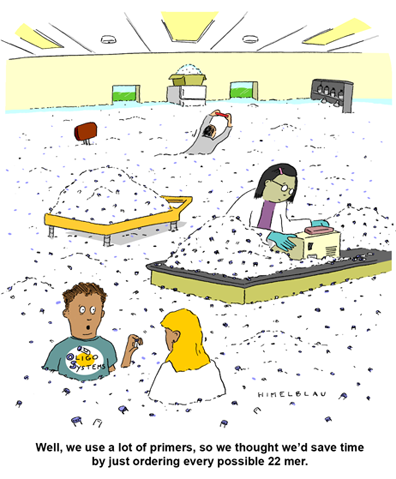 So this lab ordered over 17 trillion different DNA strands!  (At least the guy got a free T-shirt from the company...)
Posted by himelblog at 9:16 AM No comments:

Here's the last in the series of mitosis limericks (see my previous posts on prophase,  metaphase, and anaphase).  I've used these in class to highlight important events during mitosis without showing cell images.  Students will see high quality images of mitosis in in their textbook.

I have to admit that Telophase is the weakest of these limericks primarily because...it really isn't about telophase! 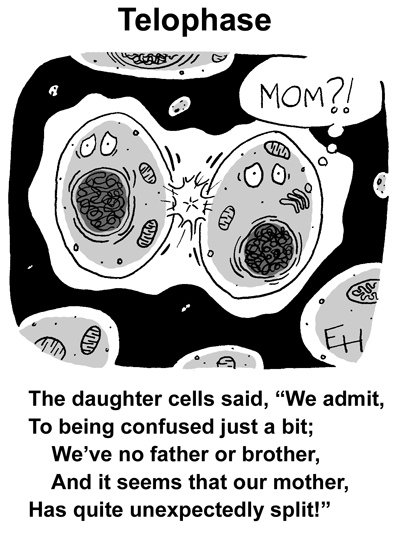 The poem really applies more to cytokinesis in an animal cell than to telophase.  At least the illustration shows some of the important events of telophase.  Specifically, the nuclear envelope reforms and the chromosomes relax into loosely coiled chromatin.