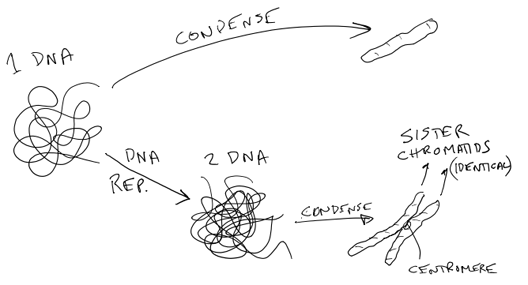 If my count is correct there should be one more limericks to go.  I will post that soon.
Posted by himelblog at 8:53 AM 5 comments:

Here's the second in the series of mitosis limericks (see my previous post on prophase).  I'll be posting anaphase and telophase soon.  In the past I have used these in class to highlight important events during mitosis without showing cell images.  Students will see high quality images of mitosis in in their textbook. 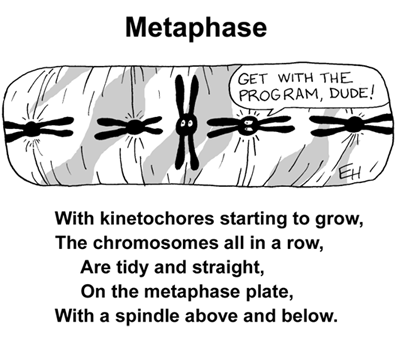 My students always seem to have trouble understanding exactly what and where the kinetochores are (Background information).  Kinetochores are the place on the chromosome where microtubules (also called 'spindle fibers') attach.  At this site many proteins interact to form a connection between DNA and microtubules.  In most organisms the kinetochore forms in the region around the centromere.

The metaphase plate is an imaginary line near the center of a cell in mitosis.  The pairs of sister chromatids move toward this line because they are being pulled hard in opposite directions by microtubules originating from the poles of the cell.  Each pair of sisters is in the middle of a tug-of-war between two equally strong opponents.

I hope this is useful.  Two more limericks to go!
Posted by himelblog at 10:01 PM 1 comment:

I was on a limerick kick a few years ago and I did my best to come up with a poem for each phase of mitosis.  Surprisingly these manage to capture most of the main events that students learn from each phase.  Since every textbook has great pictures and descriptions of the phases of mitosis I like to take an alternative approach and use the limericks in class. 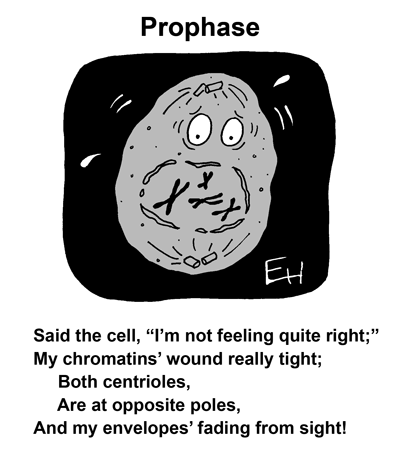 After showing this limerick I point out that the main events of prophase (and prometaphase):
Thanks!
Posted by himelblog at 10:55 AM 1 comment: